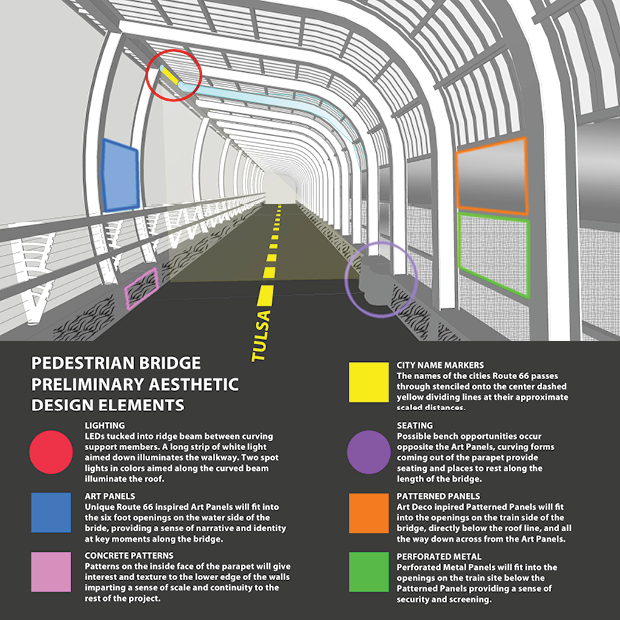 After refining the structure of the pedestrian bridge below the I-244 Crossing in Tulsa, we proposed a series of preliminary aesthetic design elements. We studied the bridge and determined which areas could be enhanced with aesthetic elements. Not all the elements proved feasible, but those that did helped to transform the space. Patterned panels create a screen on the rail side of the path, visually separating the people using the path from the trains that will be going by. The handrails are both a safety element and a design element with sculptural brackets. The striping down the middle of the path includes the names of cities on historic Route 66.

The cut metal pattern panels are influenced by local Art Deco patterning. Reinterpreting history into a contemporary context ties the new back to the old, grounding the project into its place. This re-imagining also allows room for individual interpretation. Different people will see different patterns: from Art Deco, to tire treads; the pattern has a dynamic quality of movement.

When many of the aesthetic elements of the project share a similar pattern they create a pattern family that unites the many elements of a large project. The handrails are a necessary safety element, but that does not mean that they cannot be just as beautiful as the rest of the project. The form of the handrail structure was designed to fit into the form of the pedestrian bridge structure. The panel patterns were placed into this form and the best fit was chosen. This was then detailed in 3D with all the necessary supports, structure and connections to make a handrail bracket. 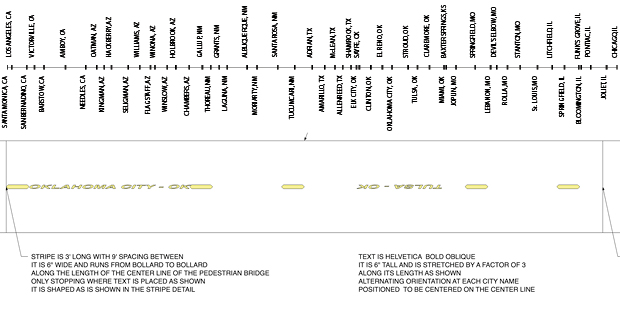 Creating a sense of place often involves connecting to and celebrating a site’s history. I-244 sits on the historic Route 66, which stretches from Chicago to Santa Monica. We decided to represent this by layering the names of the cities that Route 66 runs through onto the pedestrian path. The original plans called for a dashed center line to separate the path. We used the same technology that would have made the regular rectangular dash for these city names with dashes that relate to the patterning, adding a level of interest for those walking along the path.

The pattern panels, handrails and striping are in a family with the path structure and the concrete patterning creating a sense of place underneath a large highway bridge.